Last week, we traveled to South Dakota for the funeral of Bob Kjorsvig, my oldest son’s grandfather. Bob was an interesting man who accomplished a great deal during his lifetime. (At one time, he was the owner of the largest herd of Norwegian Fjord horses in America.) But time eventually catches up with all of us, and it was time for Bob’s final act in the circle of life. Bob will truly be missed.

In an ironic twist of fate, when we got back to our lovely home overlooking Lake Superior, we were shocked to see that seven or eight beautiful trees had been cut down during our absence. 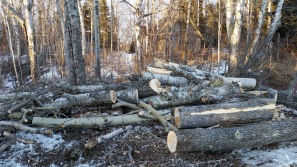 It turns out that these venerable old wonders had been designated as “threat trees,” since they were large enough to cause significant damage to the power line that runs parallel to the highway in front of our property. One of them broke off about half way up from the ground during a big wind event last summer and was being supported in mid air by some of the others. That’s probably what drew the attention of the threat tree inspectors.

Most of the trees were growing on the state highway right-of-way, but I think at least one or two were actually on our property. Nevertheless, I always thought of them as “our” trees. They’d been there since long before we bought the property, and it’s very sad to see them go. There are plenty of trees still remaining, but still, I can’t help but feel a sense of loss.

On the bright side, the removal of these trees has resulted in a clearer view of Lake Superior from our front windows. Also, they will provide a big boost to our pile of firewood and help meet our future cold weather heating needs. (That’s assuming I don’t have a heart attack from the exertion of sawing and splitting the logs.) And I know they needed to go — many people, including me, would have suffered hardship from a loss of power had one of them actually fallen on the line.

But these positives belong to a future, theoretical realm, whereas the downed trees are immediate and very real. Right now, all I can feel is sadness at the loss of some majestic creations of nature, cut down before their time, simply to safeguard humankind’s technology.

Farewell, old friends. You also will be missed.

2 thoughts on “The Sad Fate of Threat Trees”