It seems to be that time of year again. Around late January or mid February, I start to think about playing golf again. Golf is the accursed game that’s had an icy grip on my heart for over half a century. Every fall, the idea of ever playing again is banished from conscious thought by my wounded ego. But then, salved by the cold and snow of winter, fueled by watching the professionals on TV, the idea begins once again to percolate. I know it will once again consume me come the spring, though I still don’t fully understand why.

Golf has been described in many colorful ways, “a good walk spoiled” (Mark Twain) being one of the more famous. Most golfers will also say this, however: “A bad day at golf is better than a good day at work.” And Matt Davidson, in Slice, told his new bride that golf isn’t really better than sex, it just lasts longer.

Yesterday, I watched Jordan Spieth notch his ninth PGA Tour victory, becoming the second youngest in history to achieve that distinction (second by a month or so to the incomparable Tiger Woods). Spieth appeared frustrated as putt after putt failed to drop. Carding only two birdies, he still won by four strokes — a veritable cakewalk. He made it look so blasted EASY!  I know it wasn’t, but it looked that way.

For me, golf is anything but easy. I don’t have an official handicap any more, but at one time in my life I had it down to just under 10. I’ve managed to break 80 nearly a dozen times, most recently back in 2014, if memory serves. I have a million excuses for why I never get any better: I don’t play often enough, my clubs aren’t good enough, I never actually practice, I don’t take lessons, and on and on ad nauseam. But the deeply buried root of the problem is that GOLF IS HARD! As I approached the age of sixty, my game really started going in the toilet. If I were keeping a handicap, I’d guess it’s up to 17 or 18 by now.

Of course, this lousy golf also corresponded with a steady falloff in rounds played as I got incredibly busy with my final grand Rocket Science project. Just before retiring, I was down to playing about ten nine-hole rounds and five 18-hole rounds a year. Who could be any good with that feeble level of effort? (Excuse number one.)

My decline also corresponded with a remarkable decline in distance as I continued my transformation into a creaky old fart with lousy balance and limited flexibility. I gradually got rid of most of my trusty Wilson Staff woods and irons with stiff shafts and assembled a motley collection of hybrids and flexible-shafted irons, all used, mostly from Second Swing. Who could be any good with such substandard equipment? Look at these things — 13 clubs, 7 different brands! (Excuse number two.) 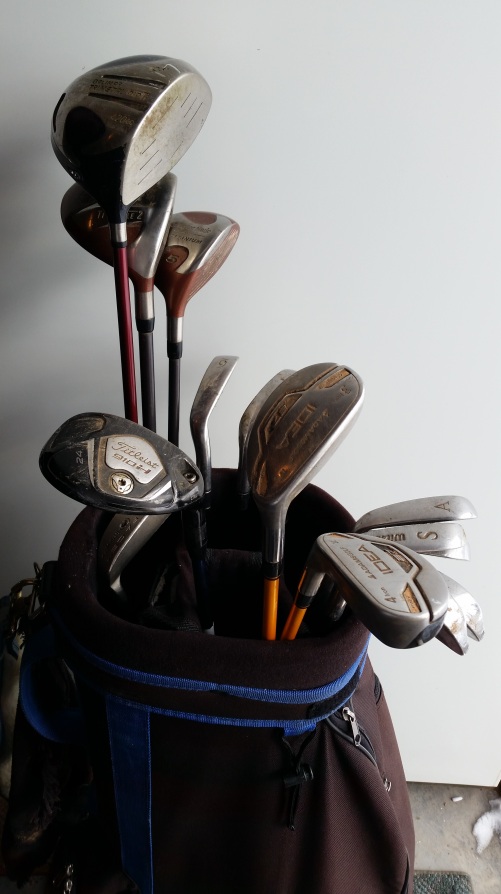 Of course, I know I should be exercising and practicing, but what fun is that? But I do fully intend to put truth or lie to excuse number one. A retired guy like me needs to be out on the course two or three times a week, minimum. And I’m going to do it as soon as the courses open up here. Let’s see … that ought to happen by early June, for sure.

If (OK, when) that doesn’t work, I may finally pop for some new clubs. The golf club industry has become a juggernaut because most frustrated golfers do just that, and I know it rarely works, but what have I got to lose? Nothing but money, am I right?

I do also plan to do something I once thought unthinkable — move up to the Senior tees. (I suppose I ought to start exercising and practicing, as well. But who am I kidding? That’ll never happen.) I’ll probably just mope my way around the course, day after day, asking myself that age-old question: Why is this infernal game so insufferably HARD?

And yet, I absolutely love the game. (Maybe I should have asked Napoleon for some insight into that mystery.) I’ll keep you posted on how things go on the links as time goes by.