I just returned from our annual August visit to Thunder Bay, a venerable, sprawling city located in Ontario, Canada, along the north shore of Lake Superior. I say annual because various family members and I have been making a trip there sometime in August nearly every year for the past several decades. (Disclaimer: This was actually our fourth or fifth trip to Thunder Bay this year – since we now live so close, it’s no longer that big a deal to go.) There are many things we enjoy doing in Thunder Bay and surrounds: go to the great shops in the Bay and Algoma district (Finnport, Scandinavian Delicatessen, Finnish Bookstore, Cheese Encounter), explore the Marina Park, sweat away stress at the Kangas Sauna, ooh and aah at the Kakabeka Falls, immerse ourselves in history at Old Fort William, visit the amethyst mines, even an occasional round of golf. We usually do at least one of those things each time we visit.

But one thing reigns supreme and simply MUST happen every single time – we eat lunch at the Hoito Restaurant.

A sign at the corner of Bay Street and Algoma Street proclaims that the designated Bay and Algoma Historical District is the home of the “World Famous” Hoito Restaurant. The restaurant was founded in 1918 at the site of the Finnish Labour Temple, itself established in 1910. According to the Hoito web site, “The idea for the restaurant came about in a logging camp outside of Nipigon. Finnish bush workers at Kallio’s camp were concerned that, while they could find cheap lodging in Thunder Bay, they couldn’t find reasonably priced home-cooked meals. The request to open a co-operative restaurant was taken to the Board of Directors of the Finnish Labour Temple and was approved. Fifty-nine people pooled their money into $5.00 ‘Comrade loans’ and hired union organizer A.T. Hill as the restaurant’s first manager.” (My, my – those old Finns almost sound like Communists, eh?)

My parents always referred to the place as the Hoito House, though that’s not the official name. The restaurant is almost entirely lacking in ambience, but the food is authentic Finnish fare that always transports me back to my youth, sitting at my grandmother’s kitchen table. Here are the delectable eats we savored today. 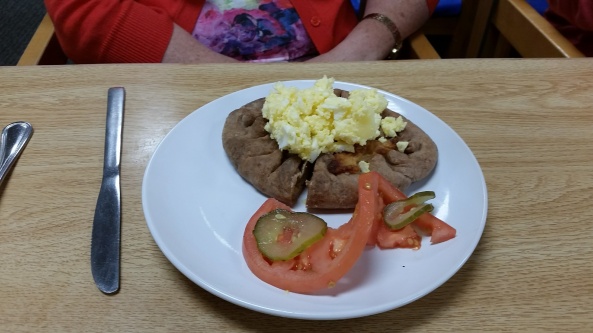 Karjalan Piirakka (Karelian pie) – rice enclosed in a sort of pocket crust made from rye flour. 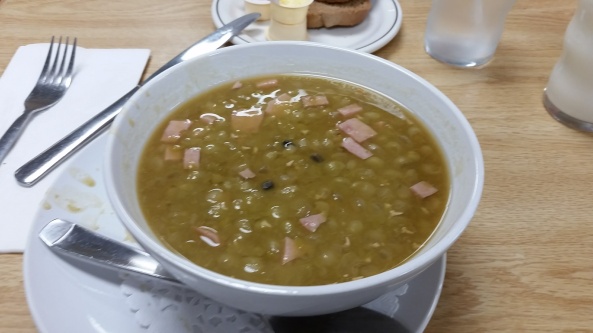 Former Italian Prime minister Silvio Berlusconi once proclaimed Finnish food to be the most boring and the blandest in the entire world. He may be right, but to me it tastes like manna from heaven. And I don’t even need any Tums after eating.

Today, I salute the Hoito House – maybe the best place on earth for a good, cheap meal.